My Three Weeks In Politics

When I told my wife I was running for Parliament she said, ‘Well, I won’t be voting for you’. I hoped she was joking but I wasn’t sure.

Even if she was serious I was definitely going to vote for myself and I was pretty sure my Mum would too. That made two votes. I’d only need another 20,208 to win.

Actually, I wasn’t planning on winning; I just wanted to make a stand. The government had closed down our primary school and now they were flogging off the site for housing. We locals had formed a protest group and announced we’d run a candidate. The candidate was me. 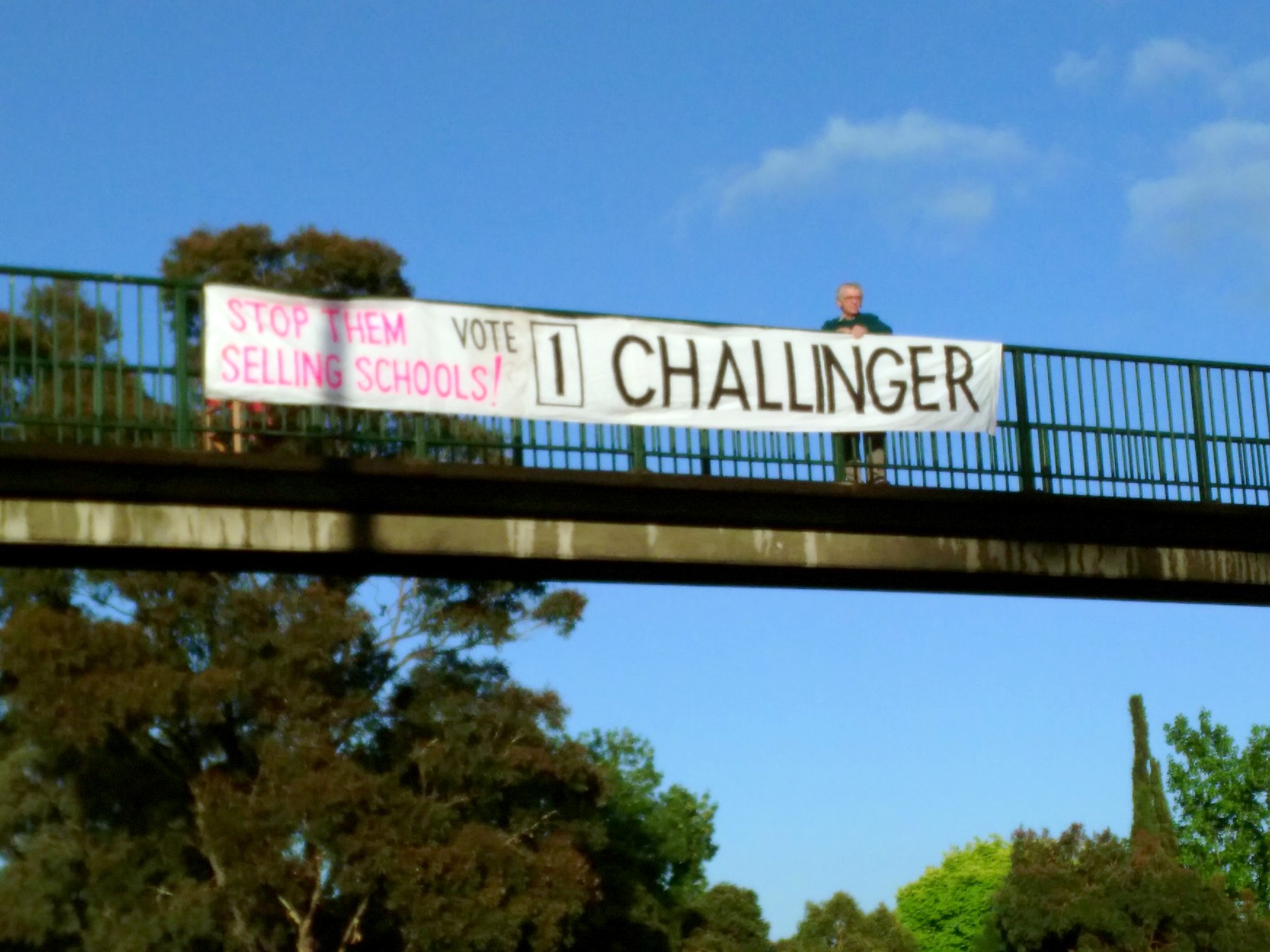 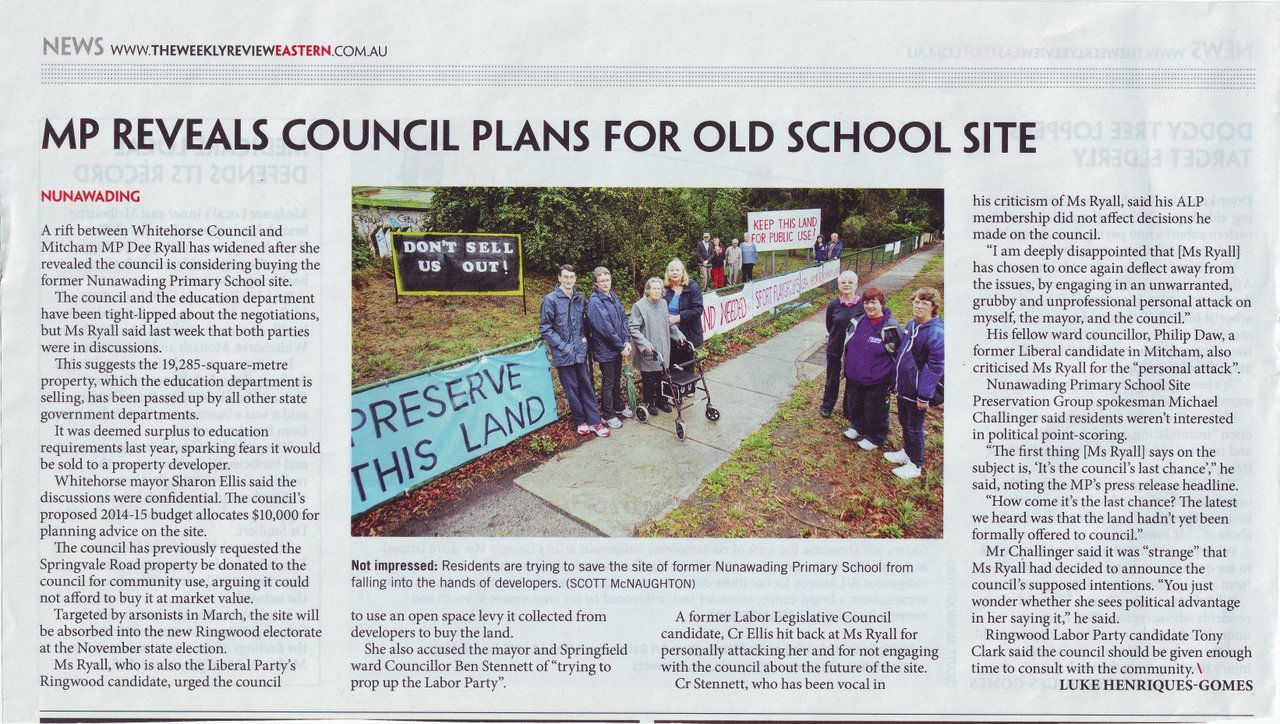 I was a novice to politics but I knew I’d need signs and leaflets and publicity stuff. Car bumper stickers were going to cost $3 each so I got a family friend to run some off on his fancy colour photocopier. I told my supporters, ‘Here are the stickers. Only they don’t exactly stick. You have to use your own Sellotape’.

Mick had a bus and offered to drive it around with ‘Vote Challinger’ written on the side. He promised he had a proper driving licence and that the bus was registered. I asked if it was roadworthy and he said sort of. Two out of three wasn’t bad and I got all excited. But a week later Mick reported someone had broken into it and pinched the steering wheel. So much for the bus.

Nominations opened on the Wednesday after Cup Day. I was first in to lodge my form and pay the deposit. The deposit’s designed to discourage cranks. You have to put money on the line to show you’re serious. You get it back if you poll four per cent of the first preference vote. You also qualify for funding at the rate of $1.64 per vote. So four per cent was the figure I had to beat or I’d done my dough.

The deposit was $350 so I raided the money box where I keep my $2 coins. The bloke in the electoral office took a while to count them out into 35 little piles. I said, ‘When you refund it I don’t want it in $2 coins’.

I had a team making banners. We had a huge roll of fabric we’d found in the hard rubbish – about two kilometres of the stuff. Trouble was it was grey and we needed white. I bought a spray painter at Bunnings. The instructions didn’t mention to wash the nozzle after use so it only worked once. I had to grab a paint roller instead; I knew how to work that.

We cut stencils out of cardboard boxes with provocative slogans like ‘Shake them up!’ and ‘Make them listen!’ I shelled out for nails, plywood, gaffer tape, plastic ties, grommets, metal stakes, cans of spray paint. Bunnings did real well out of me.

The election process is on a tight timetable. Nominations closed at midday on the Friday and an hour later they held the draw to decide our position on the ballot paper. In days gone by candidates were listed in alphabetical order. People used to change their names by deed poll to Mr Aardvark to score first place. So they made the system a random draw.

These days it’s computerised, though they still had a wire barrel as a back-up in case the power went off. All the candidates and hangers-on stood round while an official projected our names onto the wall. There were seven of us.

We got a five second countdown. Then the names scrambled and we all held our breath. It was like Tattslotto, quite exciting. When my eyes focussed my name was on top. I’d drawn first place.

Brendan, the Greens candidate, congratulated me. He said, ‘You’ll get the donkey vote’. Bewdy, I thought. The donkeys have got to vote for someone. It might as well be me.

A couple of other candidates sounded me out for my preferences: the Greens, People Power, Country Alliance. I gave my second preferences to Labor. They’d given us promises about the school while the Libs hadn’t even answered our letter.

Labor had drawn the seventh spot so it made sense for them to number their card 1,2,3 upwards from the bottom. That left me their last preference! When your allies put you last, what hope do you have?

In fact it looked as if everybody would put me last. Not so. In the end the Christian Alliance only put me second last; they must have liked my views on euthanasia.

I went to two candidates’ forums, one at a church, another at a bowling club. We candidates each gave a short speech and fielded questions from the floor. The audience seemed to have made up their minds already; the undecideds who I needed to persuade were all at home watching TV. I don’t think I won any votes at the forums though I had some tea and biscuits.

By now I’d got plenty of banners and signs but not enough sites to put them up. People who wanted to help often lived in rental properties where banners weren’t allowed. I thought: what about their human rights? 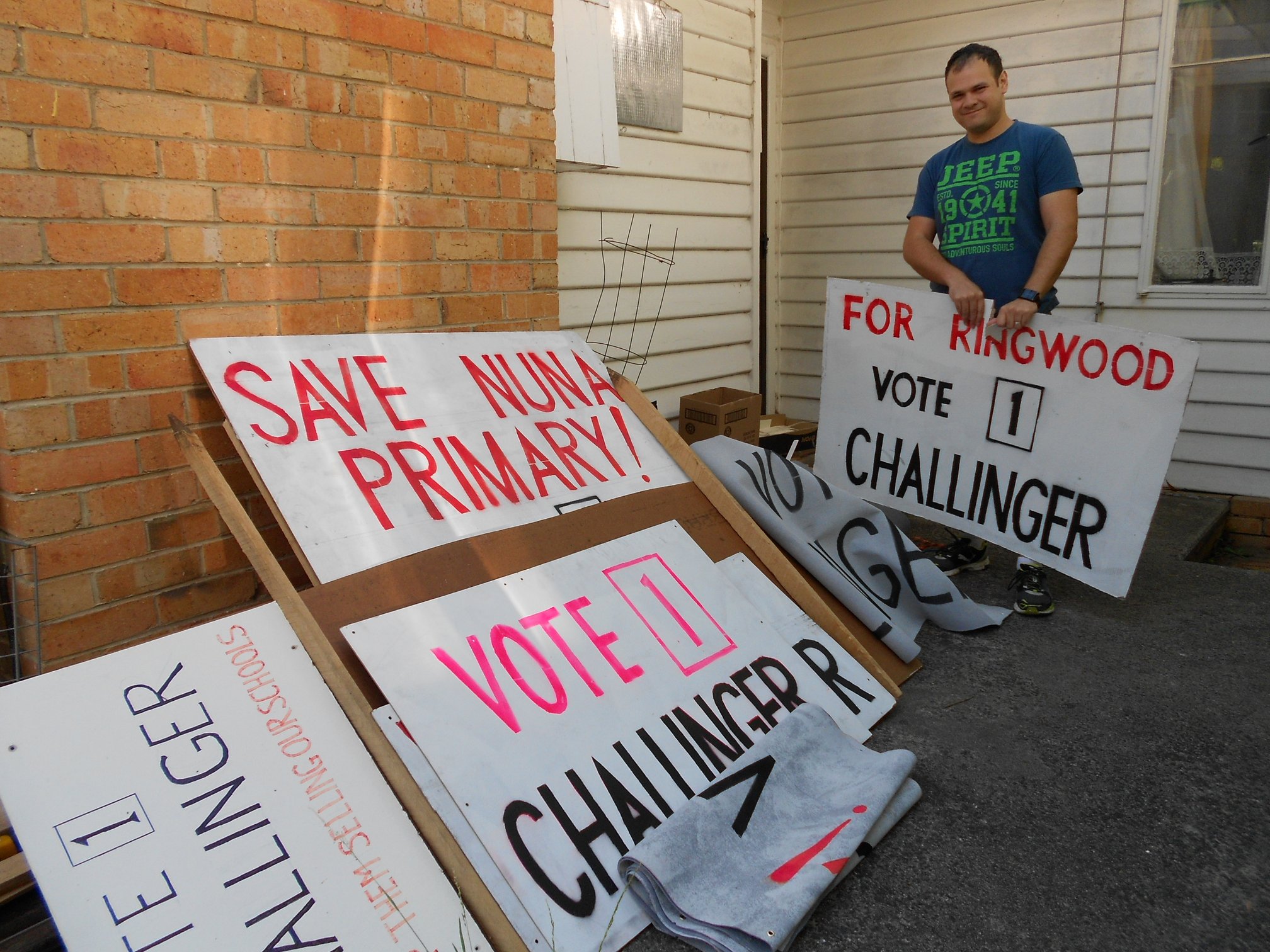 Five of my signs disappeared overnight, which seemed a bit sus. So I decided to wave a banner at peak hour traffic. My followers thought it was illegal but I talked Ted and Anastasia into helping. We stood on a foot bridge over the Eastern Freeway holding a banner. About four thousand cars passed in an hour. Twenty-one gave us honks and three gave us the finger. The next day we did it again and only got three honks, but Anastasia wasn’t with us that time.

Door-knocking was hard work. Most people are against selling off public assets but it took time to explain they could vote for me then give their second preference to the party they really wanted to win.

I ran into a few nuts. One bloke wanted to know what I’d do about cafe food if I got elected. Another was still worried about Harold Holt and the mystery submarine. It brought to mind the Duke of Wellington’s description of democracy: the collective wisdom of individual ignorance.

I paid big money to get a leaflet printed in full colour. I paid more to get it delivered because 25,000 was too many for our group to manage. I don’t know how many actually went out but my copy came buried in the middle of eighteen items of junk mail. Who knows if anyone actually noticed my screed? What a rip-off!

So I organised another leaflet and pumped up the tyres on my push-bike. As a kid I was a dab hand at delivering the weekly newspaper but I’d lost my touch. Besides, a flimsy sheet was harder to handle.

Ted and I did a few days letter-boxing but the sun was hot and the hills were steep and 8000 takes much longer to deliver than you think. As for those bloody letterboxes! Some were at ground level, some two metres high. The worst were the ones with spring-loaded flaps that snapped shut like rabbit traps on your fingers. I wondered how the posties put up with it all, but at least they get paid.

By the third week campaigning seemed like total drudgery. I handed out leaflets at railway stations but not everyone accepted them. I didn’t mind the knock-backs but some commuters stalked past as if I wasn’t there. That bit was demoralising. A nod costs nothing; I just wanted my existence acknowledged.

All this time the early voting booth was open. It’s where you go if you want to avoid the queues on election day. My wife had come good and she and Ted did the lion’s share. They enjoyed the camaraderie among the handers-out. Labor shared their water with us, the Country Alliance candidate bought us all cakes and most of us handed out each other’s cards when someone needed a toilet break. Only the Libs were stand-offish; I guess they were paranoid about losing.

Come polling day. I had 17 booths to man and I conscripted every friend and relative I could. Handing out how-to-vote cards is a real chore but the atmosphere was sociable. It was nice that you can disagree and compete and still be civil, friendly even. Most of our group valued the experience. It made you appreciate living in a democracy.

Of course democracy isn’t in the voting but in the counting. I had the right to appoint scrutineers but how could I ask my troops at the end of ten hours to do another four? Besides, I had faith in the system. Australia isn’t Russia. Nobody’s going to carry in a sack of phantom votes through the back door.

I followed the results on TV and the internet. At first things looked good. I polled well at my closest booths and ended the night on 4.3 per cent. Over the following week, though, the postal votes trickled in and I lost ground.

I needed that four per cent to get my deposit back and collect two grand of funding. I ended up with 3.97 per cent. What a bummer.

At the declaration of the poll we candidates were able to say a few words. I said: ‘If I’d got ten extra votes I would have qualified for electoral funding. My failure has therefore saved the tax-payers of Victoria $2700. That, people, is my contribution to politics!’

Campaigning had been hard work. It showed how difficult it is to get your views across and break through the two-party system. Still, I learned a lot. Next time I’ll kiss more babies.

(Written for The Big Issue but rejected.) 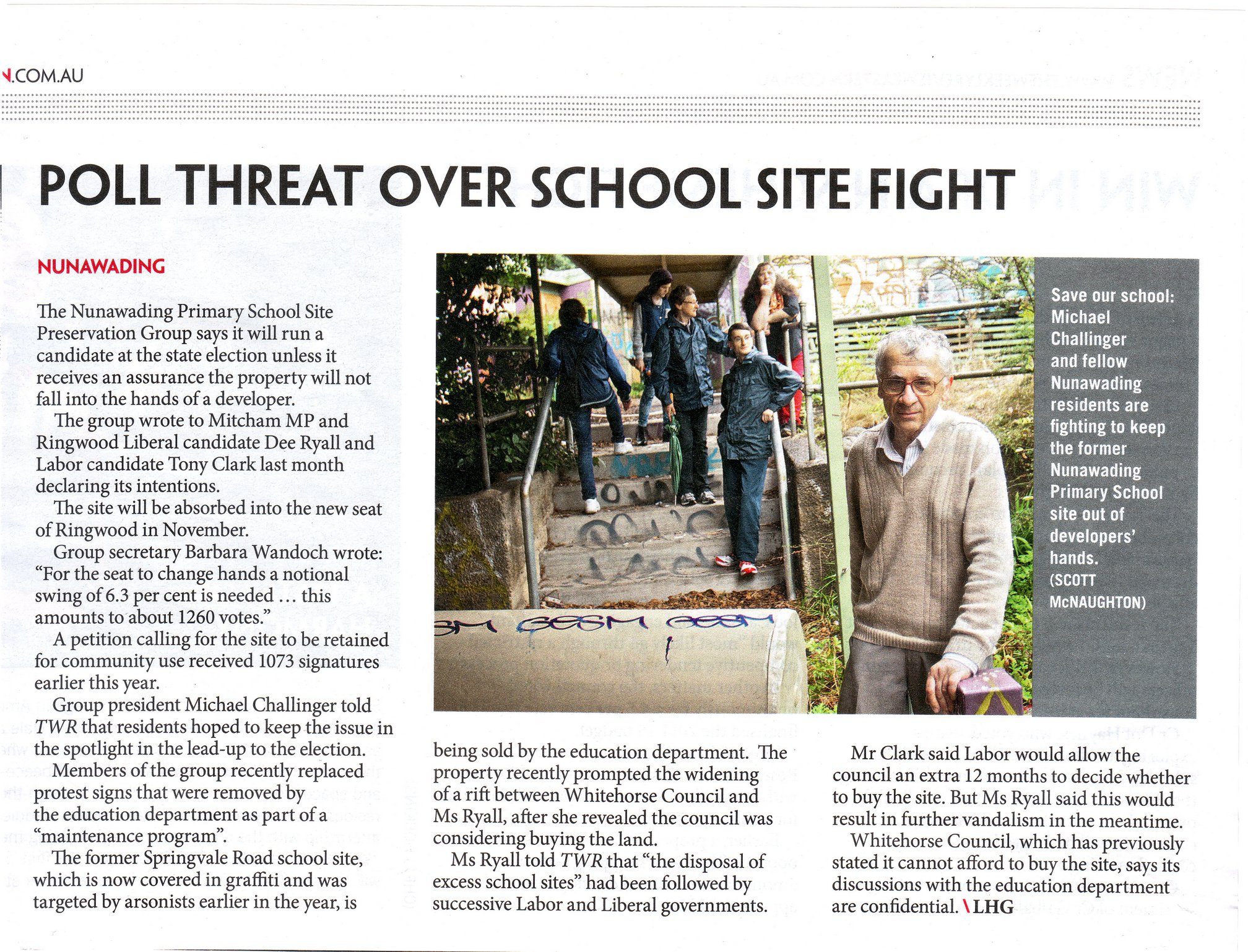